Go to Nineveh! Speak Up! NOW!

When Jesus set us free his sacrifice included every area of our lives. The freedom we share as children of God because of His sacrifice gives us a hope that is beyond any hope the world or any other religion can give us. So why are we afraid to go to Nineveh? 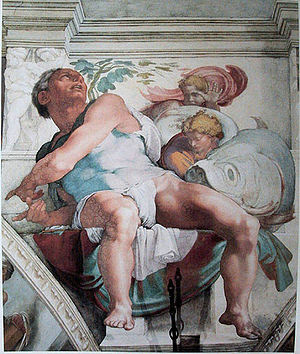 The Prophet Jonah, as depicted by Michelangelo in the Sistine Chapel

We've been delivered from strongholds, but do we really know what that means? We know that there is none righteous, no not one. We know that we have become the righteousness of Christ and that who the Lord sets free is free indeed. When we allow fear to block our path, we may be neglecting the things that God has called us to do.

Going to Nineveh, Jonah had to tell a whole town that they were steeped in sin and that God was going to destroy them if they didn't change. He didn't compromise with them and try to reason out their evil the way we are trying to compromise and reason with evil today, instead he ran. He ran away from his home of blessings and ended up spending three days in a stinking, fishy hotel. Jonah 1:17 Now the Lord had prepared and appointed a great fish to swallow up Jonah. And Jonah was in the belly of the fish three days and three nights.

Finally, when Jonah did what God asked him to do, he was blessed, but he wasn't happy and still argued with God that it wasn't fair. He thought it wasn't fair for sinners to have the same covering that he, as a 'self' righteous person had, until God showed Jonah that everything he had belonged to God and that Jonah had no right to question God's judgement.

Yes, every sinner has a chance for redemption. But many are called and only a few are chosen. Why? Maybe because we refuse to go to Nineveh. We refuse to do what God has asked us to do. We try to compromise and reason with evil instead of pointing it out for what it is.

So how can we be assured of a house full of blessings instead of a stinky fish hotel? 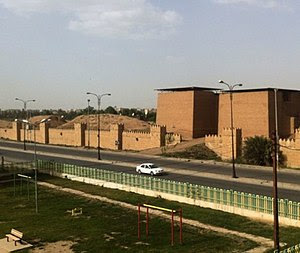 Nineveh. The Mashki Gate. Reconstructed. One of the fifteen gateways of ancient Nineveh. The lower portions of the stone retaining wall are original. The gateway structure itself was originally of mudbrick. A few orthostats can be seen at the right of the passageway. Height of the vault is about 5 m. (Photo credit: Wikipedia

5 Biblical tips to understanding the will of God.

1. Give God due credit. God is omnipotent. Expect that in his omnipotence and loving nature he is also forgiving to everyone, not just you.

Micah 7:18 Who is a God like You, Who forgives iniquity and passes over the transgression of the remnant of His heritage? He retains not His anger forever, because He delights in mercy and loving-kindness.

2. Submit to God with a humble heart as you would to a father you love and trust. God does not belong to us for our own private interpretation. We belong to him.

Psalm 62:5 My soul, wait only upon God and silently submit to Him; for my hope and expectation are from Him.

3. Do what you are asked to do. When God asks us to do something he has a purpose we may not understand or notice at the time, but because God in his omnipotence sees and knows everything, he knows the outcome and that outcome is to bless.

John 6:29 Jesus replied, This is the work (service) that God asks of you: that you believe in the One Whom He has sent [that you cleave to, trust, rely on, and have faith in His Messenger].

4. Go to God whenever you slip and he will keep you from falling (or from being swallowed up).

Hebrews 12:7 You must submit to and endure [correction] for discipline; God is dealing with you as with sons. For what son is there whom his father does not [thus] train and correct and discipline?

5. Trust God. There's nothing more to be said. If we can trust him we can humbly submit to him and know that our lives are in his loving, wise, intellectually superior, omnipotent and perfect hands.

Genesis 15:6 And he [Abram] believed in (trusted in, relied on, remained steadfast to) the Lord, and He counted it to him as righteousness (right standing with God).

Psalm 52:8 But I am like a green olive tree in the house of God; I trust in and confidently rely on the loving-kindness and the mercy of God forever and ever.

Intellectualizing God - Should We Do It?

There are times when it seems as though we are fighting a losing  battle with intellectualism, but we have the victory already. The victory is evident in our faith. We see changes according to our faith and miracles that the world can never explain intellectually. 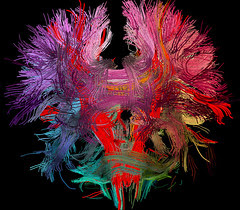 Neural Connections In the Human Brain

God is not our brains. Our brains were given by God and are subject to decay, illness, and deterioration. God is spirit and exists in multi dimensions and levels without flaws or an end. God is omnipotent, everlasting, and exists beyond any human interpretation or understanding. God is not an energy force, an angel, or a human--He is that He is--the Father of all existence.

However, the world is arrogantly bent on diminishing the evidence of God's existence and minimizing life to what we can see, feel, hear, smell and taste while using the fragile, sinful, passing bodies and brains we inherited.

All the better to kill you, my dear. If the world can convince you that there is nothing beyond the natural, you lose hope, live destructively for today, lose faith, do whatever feels good to you without considering the consequences, and pass on a paganistic approach to tomorrow. Human reasoning is flawed at best and all the good a human does without God is like filthy rags.

Not all scientists relegate existence to chance, evolution, and human brain reasoning, however. These are the scientists whose evidences should become part of our understanding and knowledge. Some links below. 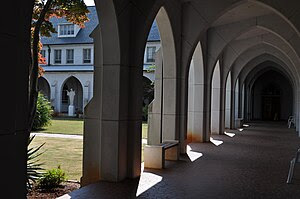 A view of the cloister garden and statue of Jesus from one of the walkways at Holy Spirit Monastery in Conyers, Georgia

5 Biblical tips to understanding beyond:

1. Get to know your Bible. Don't take someone's word above God's word, but allow the Holy Spirit to guide you into all truth.

John 4:24 God is a Spirit (a spiritual Being) and those who worship Him must worship Him in spirit and in truth (reality). John 4:23 A time will come, however, indeed it is already here, when the true (genuine) worshipers will worship the Father in spirit and in truth (reality); for the Father is seeking just such people as these as His worshipers.

John 6:63 It is the Spirit Who gives life [He is the Life-giver]; the flesh conveys no benefit whatever [there is no profit in it]. The words (truths) that I have been speaking to you are spirit and life.

2. Check everything out with the word of God which has existed and prophesied accurately for thousands of years.

3. Choose the input you receive wisely. A world on the edge of ruin will create a fantasy regarding the reality of God's existence and life after our fragile bodies. However, God is clear in his word about the evidence of his existence and the life beyond our skin.

2 Peter 3:5 For they willfully overlook and forget this [fact], that the heavens [came into] existence long ago by the word of God, and the earth also which was formed out of water and by means of water,

4. Do not disregard the evidence of Jesus and witness of his resurrection, his glorified body, and ascension when you hear a partial and flawed report on heaven, hell, or the existence of God or spirit.

John 14:23 Jesus answered, If a person [really] loves Me, he will keep My word [obey My teaching]; and My Father will love him, and We will come to him and make Our home (abode, special dwelling place) with him.

1 John 5:7 So there are three witnesses in heaven: the Father, the Word and the Holy Spirit, and these three are One;

1 Corinthians 15:6 After that, he was seen of above five hundred brethren at once; of whom the greater part remain unto this present, but some are fallen asleep.

5. Submit to, expect, and experience God's guidance. Without submitting humbly to God you will never know the truth. The intellectual without wisdom and godly understanding is only reporting what they hear, see, feel and learn in the natural. God will not be and is not with them.

Micah 6:8 He hath shewed thee, O man, what is good; and what doth the LORD require of thee, but to do justly, and to love mercy, and to walk humbly with thy God?